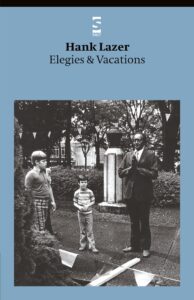 A book of intense emotional power, Elegies & Vacations marks Hank Lazer’s taking the resources of innovative poetry in new directions that are at once elegiac, skeptical, and spiritual. Eleven poems, no two alike, Elegies & Vacations is an ambitious attempt, in the words of Robert Duncan, “to recreate the heart of poetry itself.” Linking elegies to extended journal-like meditations, Elegies & Vacations asks “what the day may mean.” At the heart of the book is a long poem, “Deathwatch for My Father,” which tracks the poet’s father’s final months, testing out the capacities of innovative poetry in the face of the death of a loved one. The book explores relationships with the dead—from the poet’s father, to John Cage, to Kenneth Burke, to George Oppen—while also, through family vacations, projecting forward to ask “to what are we ancestral.” The opposed or apposed guiding lights of the book—John Ashbery and George Oppen—like the juxtaposed elegies and vacations, offer divergent modes of verbal and ethical grace. Informed by a Buddhist sensibility, as well as by the relativistic thinking of reform (and mystical) Judaism, Lazer’s poems move through varying terrains of form, textuality, and geography, from Suzhou (China) to the Abacos (the Bahamas), from Diamond Head (Oahu) to Orono (Maine), from an extended portrait to a journal, from children’s stories to a two-columned composition on the nature of literary history.

‘A sensitivity to “Perspective”: this is the quality we find most tellingly in 3 of 10. Lazer’s is a bravura performance that makes us look forward to his future “displayspaces.”’

‘Elegies and Vacations is an extended and complex meditation on progenitors—poetic, familial, and otherwise. It continues the project Lazer began in Doublespace by attempting to fill in, or traverse again, the space between its two halves, which can be fairly said to represent the poles of contemporary American poetry. Elegies and Vacations, far from a miscellany, is a comprehensive examination by a poet who has explored the breadth of contemporary poetics as fully as anyone writing in English today.’

‘Known for his acute criticism as well as exploratory poetry, Hank Lazer is a poet who might be described as a stylistic risk-taker as well as forager in the treasure house of words … Thus, for all the play of these poems, what draws me the most to Days is the near-spiritual urgency and ethical integrity of Lazer’s poetic inquiry.’

‘Lazer blends the purposes of poetry and the ISMs of various camps and forges a series of poems that is both fun to read with the heart and with the mind. This is no easy exercise in these days of thick lines between the many classes of poetry.’

‘“There are many things to do in music” says John Coltrane, one of the presiding spirits of Lazer’s most recent book of poems. Days is charged with this sense of possibilities, a passionate commitment to play … The happiness so evident in this poetry is grounded in an awareness of this “appalling age.”’