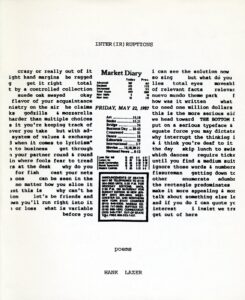 “To be is to be interrupted” (interpreted) might be the motto of Hank Lazer’s novel series of poetic investigations titled Inter(ir)ruptions. Everyday life is hysterical, or hysterically ruptured with excruciating, often hilarious, detail or detritus or do you know another way to bring home (and the poem is the best home any boy’s ever had) what parallel or paralyzed or conflicting or restricting discourses might say to each other if they met on a crowded page or in the gaze of a deserted reader. All’s here, any body there?

We interrupt our regularly scheduled poetry programming to bring you the following noose item: Hank Lazer’s Inter(ir)ruptions is a damned pun to read, as long as you donut mine having yore convictions overtroped. For revolutionaries here’s some mao bull in the china shop, moore public frauds, plus a stein full of double entry accounts tolling reverses in the economy of our polit(e)ical language. Three fears for Henry who, like his namesake, thoreauly surveys our “pro state cancer”, puts “muddy in the bank”, gets repeated citations for a “pair of taxes, identifies with loony boston birds, designs our metropolitan homes, & takes the bottomless measure of our wanting. Tanks for knotting, reggae rebbe.

Inter(ir)ruptions presents a series of ten collage poems incorporating a wide range of layouts and materials, from batting averages to critical theory, from fashion and interior design columns to Emerson’s Journals, from solicitations by a literary agent to research in neurophysiology. Inter(ir)ruptions places poetry’s more traditional lyrical and narrative voices within a bombarded and over determined linguistic field. At once humorous and metaphysically in earnest, Lazer’s Inter(ir)ruptions explores a poetry fusing poesis and politics.