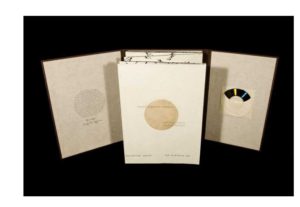 Simple harmonic motions was made by Inge Bruggeman of INK-A! Press in 2001. It is based on poems written by Hank Lazer that are a part of his larger body of work, Days. The book was printed in an edition of 50 copies on Kitikata paper. The typeface used for the poems is Spectrum and the Morse Code font was created by Bill Morrison (this text repeats ‘the visual cadence of words on the page’). Both text and image are printed from photopolymer plates that are hand-processed by the bookmaker except for the soundwave images which are photocopy transfers. The book rests in a case which holds a compact disc of the author reading the poems and performing them with the Alabama Poetry Ensemble. Special thanks to Jake Berry for the recording.